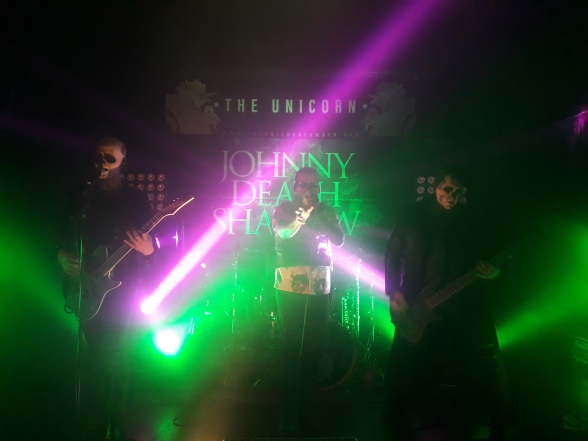 At the beginning of the working week, and as the final countdown to Halloween, the outskirts of Camden houses Halloweek, a series of gigs and events hosted by curious free house The Unicorn, a mostly modern featured, open planned boozer, with opinionated locals who very clearly voice their disdain for live music as I scrutinise the bar, and a decently sized function space and stage for where tonight’s events would unfold.

I grab a beer, perch upon one of the many stools facing dead opposite the stage, and await tonight’s openers, Prescription Happiness. The inset and outset play out as moments best described as voices inside your head, akin to the Gene Wilder tunnel scene from the original Chocolate Factory film but eerieness switched for overwhelming dread. Initially their sound evaded an immediate touch point, their music oft feeling reminiscent yet totally their own. Half of their set borrowed from modern metal staples, Sempiternal-era Bring Me the Horizon and Slipknot being immediate reference points, but the other half an eyebrow-raising concoction of Korn, Incubus and most solid hard rock bands. However on record, there’s more of a Tokio Hotel comparison and that also becomes evident frequently. Without a shadow of a doubt though, these are boys with thick tones, and their breakdowns are plenty sizeable in stature. Despite a heavy emphasis placed on the screams, the clean vocals impress far more, and draw some emo-esque comparisons into their already head-spinning influence pool. The quartet’s set ends with Quietly Falling, a tremendous groove-laden number that scratches a future radio airplay itch if it hasn’t already. Their half hour elapsed rapidly, undoubtedly heavier than hardcore, yet not quite heavy enough to tussle with the bruisers of metalcore, not that they were trying to.

The beginning of Lady Rage’s set is regrettably missed, after an awkward run-in with the Johnny Deathshadow boys face painting in the gentleman’s water closet, so I hasten to finish my business and make it back to the stage. Very much in the spirit of Halloween, a pumpkin, Beetlejuice, Harley Quinn and whom I believed to be Freddy Krueger, though I’m reliably informed they came dressed as the drummer, unleash a wall of noise that bridges that gap between Hole and The Distillers perfectly. Unmistakeable, ferocious, scuzzy, grunge-soaked, riot grrrl punk, with plenty of melodies to back it up. That’s without mentioning a bass tone with serious clout, and their vocalist, the aptly named Siren Sycho, having terrifying power behind her screams, and being able to maintain such a formidable strength consistently. Their repetoire busts out a cracking cover of Billie Eilish’s Bad Guy too, taking on the form of the Rolling Stones or T-Rex butting heads with Brody Dalle, and that is exactly as good as it sounds. Wholly entertaining enough to watch again, their set includes a guitar-bass duel, a song titled ‘Not Joan Jett,’ and another that ravages social media, while live-streaming their set on Facebook, so while not quite as angry as face value implies, these ladies present themselves just as talented as they are self-depreciating.

While also in the spirit of Halloween, though just their regular stage attire, the misleadingly named Spectral Darkwave stepped up, masks, monocles, and sunglasses upon leather clad vestments, addressing us to what was assumed to be hurtling through the space-time continuum. A name like that, you would expect perhaps some sort of gothic metal influx atop synth. Not even remotely close. Instead, what we get is far more progressive, sludgy, almost straying into doom territory at times from this trio masquerading as Lovecraftian time travellers. Musically, their assault is airlock tight as they dive through dirges often about war and the horrors of mankind, bar the odd track about elephants or the death of a red giant, each track assimilating subtle characteristics of its era or subject matter, a very clever writing touch. They bare some sonic resemblance to Mastodon or even Opeth, with a constant growl dictating their narratives, but interspersed with some light-hearted jibes between songs. It ends up endearing towards the end, something only a British band could accomplish comfortably. Some waves of synth and programmed symphonic brushes do fade in and out, giving a sense of ethereal gloom, but ultimately this spectral entity oozes sludge and a metric tonne at that.

At one point, Johnny Deathshadow introduce themselves as Germany’s most loved party band, before announcing that their next song is about cancer, and that sums up their performance pretty succinctly. Playing London for the first time in their careers, their setlist contained an excellent variety of old and new material, of blistering and nuanced paces while squeezing most of the hits in (Black Clouds, Dark Hearts admittedly a surprising omission). Their stage presence flickers between intimidating and intimate, minor sexual frictions dotted throughout their performance, and their show itself is nothing short of masterful, light choreography alone granting gravitas worthy of a band playing a thousand capacity crowd than a small pub on the fringe of Camden. Red Rain opens aggressively, the chorus of cries offsetting the white hot intensity that rarely lets up the whole show. The skull-faced quartet scorch through four of their best from latest album D.R.E.A.M. which next to Red Rain, include a stripped back yet even more fiery rendition of Legion, and a fittingly melancholy Embers. Paying tribute to their punk roots, Under His Eye ignites with the headbanging crowd as does several of the set’s second half including Bleed With Me fan favourites, the archetypical Neue Deutsche Hart groove of Apocalypse Trigger, and the ground-stomping sway of Shadow, before concluding on the exhilarating Kill The Lights, and they even finish with streamers. Blood red obviously, but such an unexpected delight at the end of a storming set.

Johnny Deathshadow jokingly remarked that the band would be dead in the water had they started in the UK, crediting the trio of bands they had shared the stage with that night, but the Hamburg group played with such passion and zeal, and with the aura of bonafide superstars, the performance felt every part special as they had intended. Poor attendance aside, this industrial metal troupe’s ascent can hopefully be a slow-burner, German gothic circles excluded, as live and on record, they are destined cult heroes in the making and a fearsome sight to experience.

Entering London and the musical heartbeat of Camden, it’s clear that Friday night hasn’t taken full effect yet, in the twilight moments of rush hour traffic, the hubbub outside Camden Town station breathes quiet. Overcast skies threaten ahead, but it stays dry for now. A perfect, ominous climate for the music that awaited around the corner.

I enter the Underworld only a few minutes after Belgium’s Mother take the stage, only after security nearly forgets to hand my ticket back over. There’s some inaudible whispering every once in a while, but there’s a constant ebb and flow of sludge-soaked noise, with terrifying roars tearing through frenzied and impactful guitarwork. Pace switches often, looping numerous layers of guitar, building melodies inside the unstoppable tides to what was a fascinating narrative. The trio ends on a small section of finely pronounced ambience and tranquility, and quell what was a raucous storm for twenty or so minutes. The early show did harm the performance admittedly, but they were utterly mesmerising from beginning to end. In the right circumstances, I’m sure this performance would crush every venue they set foot in. Out of the 10 or so people here, they absolutely made a fan out of me.

Conversely, there’s nothing pretty about Wren, and thankfully the Underworld starts to fill as they take the stage. Being descendants of the unstoppable Holy Roar records, ought to give you some indication of what was about to transpire. Ambient dissonance is instead transitioned into half an hour of primal intensity; an avalanche of concrete-pounding, bloody-knuckled riffs and nerve-shredding screams seemingly played to test limits of ear drums endurance. Imagine your loved ones being cast under the throes of perdition, and that drifts somewhere close to the staggering show of strength on display. Only dulling drones and sharp sustains broke the unrelenting nature of their performance. Although marred by some minute annoyances by mildly inattentive tech crew, their Torche on steroids-inspired onslaught is received well by those desperately trying not to be flattened.

Copenhagen’s Town Portal follows, only then realisation setting in the international flavour of this night, and the most controlled noise barrage yet is what emerges. Magistrates of math-tinged dynamic instrumentals, there’s moments of melodic magic and deeply gratifying groove over compelling syncopated beats which the brain struggled to absorb whether it was truly 4/4 or not, but their own technical intricacies united for some monstrous beatdowns that made obvious why they were on the bill. They were also the first band to engage the crowd thus far, that fabled endearing Scandinavian hospitality shining through their laser-focused performance. However you sought to define or catergorise this masterful performance, which physical viewing made mandatory to capture the real extent of their craft, you couldn’t peel yourself away.

You could somewhat ponder whether we were going to get our first glimpse of new music since 2015, teasing being in the studio at the beginning of the year. Regardless if that question were to be answered, Kowloon Walled City casually finish setting up, and proceed to leather and unequivocally eviscerate all onlookers with their meditated, sludge-submerged, post-hardcore dirges. At any point in their hour-long tenure, you could never tell if the Underworld felt mere moments away from collapse, the magnitude of force simply incalculable from Jon and Scott’s two-pronged guitar attack and Ian’s impossibly dense bass tone. Their Grievances-era tracks sting salient, the latter part of Your Best Years nearing driving me to tears, and the Container Ships tracks, comprising over half the setlist, rile up the crowd, the visceral 50s Dad and Wrong Side of History in particular erupting with a ferocity I’ve seen few live bands compete with. They also drag up Diabetic Feet from their now oft overlooked debut, and that apocalyptic bass grumble at the inset was the closest the Underworld came to devolving into anarchy. And intentional or not, those ravenous few stood beside me beckoned them back for a particularly bone-rattling rendition of Cornerstone before finally departing the stage. Kowloon Walled City just compose astonishing requiems, coursing with the emotional disparity of seething catharsis and agonising loss, that as their music evolves, stretches further and further untouchable.

While perhaps a fraction less as triumphant as their UK debut in 2016, co-headlining with Minsk, they sure as hell solidify their status to stride as one of the best bands on the planet, not just on record, but in a live environment, comfortably.