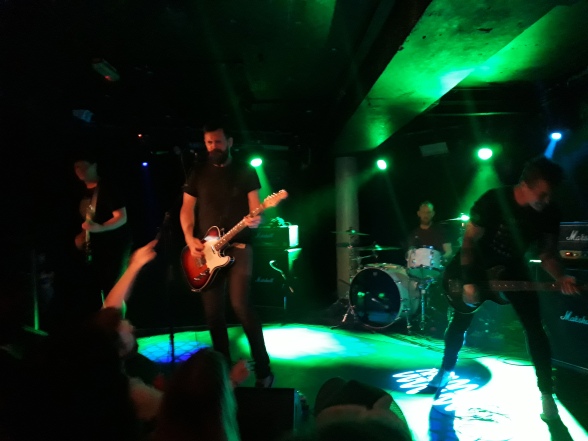 Entering London and the musical heartbeat of Camden, it’s clear that Friday night hasn’t taken full effect yet, in the twilight moments of rush hour traffic, the hubbub outside Camden Town station breathes quiet. Overcast skies threaten ahead, but it stays dry for now. A perfect, ominous climate for the music that awaited around the corner.

I enter the Underworld only a few minutes after Belgium’s Mother take the stage, only after security nearly forgets to hand my ticket back over. There’s some inaudible whispering every once in a while, but there’s a constant ebb and flow of sludge-soaked noise, with terrifying roars tearing through frenzied and impactful guitarwork. Pace switches often, looping numerous layers of guitar, building melodies inside the unstoppable tides to what was a fascinating narrative. The trio ends on a small section of finely pronounced ambience and tranquility, and quell what was a raucous storm for twenty or so minutes. The early show did harm the performance admittedly, but they were utterly mesmerising from beginning to end. In the right circumstances, I’m sure this performance would crush every venue they set foot in. Out of the 10 or so people here, they absolutely made a fan out of me.

Conversely, there’s nothing pretty about Wren, and thankfully the Underworld starts to fill as they take the stage. Being descendants of the unstoppable Holy Roar records, ought to give you some indication of what was about to transpire. Ambient dissonance is instead transitioned into half an hour of primal intensity; an avalanche of concrete-pounding, bloody-knuckled riffs and nerve-shredding screams seemingly played to test limits of ear drums endurance. Imagine your loved ones being cast under the throes of perdition, and that drifts somewhere close to the staggering show of strength on display. Only dulling drones and sharp sustains broke the unrelenting nature of their performance. Although marred by some minute annoyances by mildly inattentive tech crew, their Torche on steroids-inspired onslaught is received well by those desperately trying not to be flattened.

Copenhagen’s Town Portal follows, only then realisation setting in the international flavour of this night, and the most controlled noise barrage yet is what emerges. Magistrates of math-tinged dynamic instrumentals, there’s moments of melodic magic and deeply gratifying groove over compelling syncopated beats which the brain struggled to absorb whether it was truly 4/4 or not, but their own technical intricacies united for some monstrous beatdowns that made obvious why they were on the bill. They were also the first band to engage the crowd thus far, that fabled endearing Scandinavian hospitality shining through their laser-focused performance. However you sought to define or catergorise this masterful performance, which physical viewing made mandatory to capture the real extent of their craft, you couldn’t peel yourself away.

You could somewhat ponder whether we were going to get our first glimpse of new music since 2015, teasing being in the studio at the beginning of the year. Regardless if that question were to be answered, Kowloon Walled City casually finish setting up, and proceed to leather and unequivocally eviscerate all onlookers with their meditated, sludge-submerged, post-hardcore dirges. At any point in their hour-long tenure, you could never tell if the Underworld felt mere moments away from collapse, the magnitude of force simply incalculable from Jon and Scott’s two-pronged guitar attack and Ian’s impossibly dense bass tone. Their Grievances-era tracks sting salient, the latter part of Your Best Years nearing driving me to tears, and the Container Ships tracks, comprising over half the setlist, rile up the crowd, the visceral 50s Dad and Wrong Side of History in particular erupting with a ferocity I’ve seen few live bands compete with. They also drag up Diabetic Feet from their now oft overlooked debut, and that apocalyptic bass grumble at the inset was the closest the Underworld came to devolving into anarchy. And intentional or not, those ravenous few stood beside me beckoned them back for a particularly bone-rattling rendition of Cornerstone before finally departing the stage. Kowloon Walled City just compose astonishing requiems, coursing with the emotional disparity of seething catharsis and agonising loss, that as their music evolves, stretches further and further untouchable.

While perhaps a fraction less as triumphant as their UK debut in 2016, co-headlining with Minsk, they sure as hell solidify their status to stride as one of the best bands on the planet, not just on record, but in a live environment, comfortably.