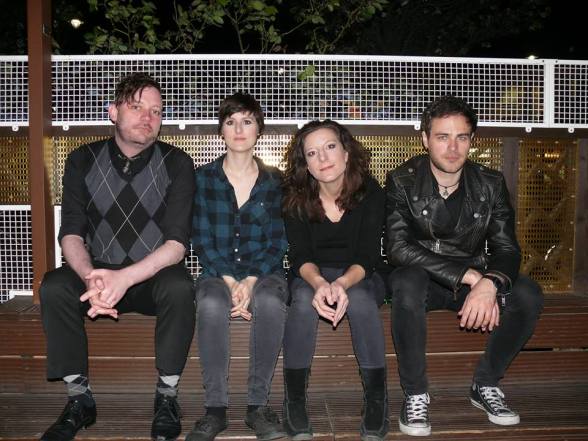 Feel free to correct me if I’m wrong on this one, but it seems as if British indie has stumbled into a bit of a rut of late. Since arguably the last golden era of indie bands this country has produced, which by my estimates was around the mid-00’s, the amount of them has shrunk considerably since the turn of the decade. Some bands no doubt were able to consistently duplicate their success upon each album release, most notably the Arctic Monkeys, before they decided to turn American, and more recently Foals who seemingly been able to evolve critically from strength to strength. There are several bands hanging in there and have been for several years, like your Ashes, your Fratellis, your Cribs, your Subways for example, many bands whose glory days seem long gone but persistently release music to a loyal, adoring fan base, who continue to turn out to shows and keep motivation and spirits high to look forward to the future. Sadly, as the nature of technology and commercial success in the industry shifts so frequently, there are several bands who’ve become causalities in the musical landslide, as sustaining a career stretches further and further out of reach for those previously thrust in the spotlight and airwaves. These are dark days for British guitar music for sure, but under the surface, what you could classify as an underground resistance is currently producing some of the best indie you’ll have encountered in years. Useless Cities, hailing from the nation’s capital, are among that resistance with an ache in their hearts expressed exquisitely through a mournful touch of the piano and a melancholic pounding of the guitar.

Though their emotions are not exclusively wired to wallow in sorrow, there is an ethereal and transcendent nature to Useless Cities’ music that melancholy brings the best out of. Their Stay EP though only three tracks long, is a wave of sonically cold but breathtaking musical splendour, combining unforgettable melodies seeped in calm composure, with an unexpected fury that riles their initial breeze into a hurricane of heartbreak. No track illustrates this exclamation point better than Follow. While Stay is a gorgeous piano-driven stroll through arctic plains and To Be Ruined, a far more spirited tumble through dreams that take a turbulent turn, it’s Follow that finely balances the band’s strengths perfectly. Delay-drenched guitar leads Follow in, with the booming of a near-tribal tom pattern from the drums, and the lightest touch of low end entering not long after, painting the scene for solemn reflection. Vocals wander in, listing things to do to an unspecified character, with his settled bellow against the melody of the guitar a strangely hypnotising presence throughout the song’s course. A bright shimmer of keys layer atop the instruments, sending a chill down the spine of the listener but adding light to this arguably greying atmosphere. This brings in the cymbals and snare of the drums, gradually shifting the tone into the subtlest of build-ups, masked well by the vocals and instruments while the grace and beauty of the piano becomes more prominent as the song progresses. Then in the song’s twilight, the guitar bursts into life with an eye-opening intensity and drums are beaten hard into submission, serving as a backdrop for the male and female chanting in harmony and the piano trying to restore a sense of tranquillity to this sudden gale of musical force. And the piano gets its wish, closing out Follow in the manner it began, a series of notes against the echo of the guitar, jerking the strings of your heart as the final note fades into the distance. What Useless Cities offer more so than a collection of songs, is an aural palette to paint your own stories from the emotionally stirring compositions they lay before you. How it affects you is left to your own semiotics, but know that they are exploring rarely traversed ground in indie and their own bittersweet twist on the sound we’ve known to grow and love, ranks among the best and most unique bands the indie scene has to offer.

Useless Cities’ Stay EP is out now at all respectable music retailers. Any more information you wish to know about them can be located on the band’s website. The band are also playing frequent live dates in and around the capital right now so keep your eyes peeled for a date near you, or bring them to your doorstep and book them for your own show.

Go give them your nicest words:

And if you are feeling kind enough to give me some nice words of my own, then feel free to do so via a like, a follow or a subscription to the site to never miss a post: