If you ever had any doubt that the nostalgia trend is absolutely back in full effect, as last decade touched upon lifting so many influences from the 80’s, this decade seemed dead set on reliving the 90’s, that abhorrent haircuts, tasteless clothing, and otherwise obsolete mediums are all the rage once more. Arguably, as much as the 90’s were a confusing and surreal decade in our lifetimes, it was an incredibly underrated decade in musical innovation. Crazily, dance music was scarcely dubbed dance music until the turn of the 90’s, despite music specifically recorded for the intended purpose to dance to existing for generations before that, going under numerous guises and evolutions. And in the grand spirit of that innovation, the very nature of dance music underwent such a radical transformation in that time period, that began with Eurodance and acid house, and ended with trance. Sticking with Eurodance, the treasure trove of that brief spell of musical history, is still unearthing rock solid tracks that the world had forgotten or had no idea existed, which brings us to Leila K’s Electric. A great success in Europe, and greater success in her native Sweden, the Moroccan-born singer and rapper resembled somewhat a solo Salt-n-Pepa for the rave generation, and Electric coursed with the kind of attitude and energy, that made it as inspiring as it was incendiary. Pulse-pounding though it still may be, Electric sounds very much a product of its time, approaching a quarter century in age and dated by its now primitive production package. Enter fellow Swede, and electro-pop anarchist Rein. 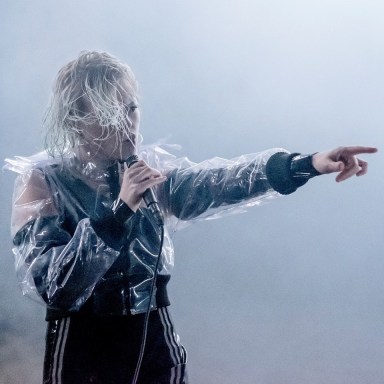 Joanna Reinikainen, better known by her stage name, exploded into the public eye in 2016, with her no apologies, take no prisoners fusion of pop, electro-punk, industrial and EBM, teeming with sociopolitical confrontation and fury at global injustices. In such a short space and time, she’s released two EPs, a handful of singles, made additional guest vocal appearances and been nominated for awards in her homeland. She even found the time to refuse to open for Marilyn Manson in that time frame. Her deeply addictive and frenetic assault of musical styles, along with Electric’s clarion call of unity, make her the prime candidate, to revitalise and empathise the vigour of this joyous gem from Scandinavia’s pop vaults. From the inset, there’s certainly plenty that embodies and mirrors the original, from the imposing buzz of the vocoder, the unwavering swagger in every syllable, even down to leaving Leila K’s name in the lyrics untouched, and the lush layering of vocal melodies at the song’s crescendo. The music video even bears a handful of similarities to its predecessor, despite the stark contrast between the cold walls of industry and the bright illuminations against woodland. It’s Rein’s distorted, driving waves of dissonance that ultimately begin to shift towards the version to call her own. The continuous kinetics of the techno arpeggio that the original gently builds itself around, is instead brought into motion by an aggressive pumping bassline, undulating as hard as putting fists to flesh, interspersed with ungodly screeches of synth. The verses of rapid-fire rap possesses so much more bite here, that extra degree of fire tremendous in spurring on listeners to invest in the song’s message. But the entire tone of the song isn’t all certifiably vicious, as Rein still retains the chorus’ soul-packed hook, taking on the delivery herself to demonstrate further dexterity in her already impressive vocal arsenal, alongside the same uplifting pads nestled within from the original, and the bassline dialled down into a throbbing disco-esque rhythm Giorgio Moroder would be proud of.

Everything summates to a pop vessel, masquerading as a industrial strength wrecking ball but with more than an ounce of humanity in its approach, and if this doesn’t serve as the perfect entrance to Rein’s expanding realm of electro-punk antagonism, dive into her earlier work and start taking notes, as this outstandingly talented lady is only going to kick more and more doors down.

Electric is out now available for purchase at all reputable retailers and on all major streaming platforms. All Rein apparel and merchandise can be found on her page here, and keep an eye out for shows hopefully in a country near to you.

You can found out everything forthcoming by Rein here:

And you can find out what is forthcoming from the Soundshark via a like, a follow, or by subscribing for free to the site:

A canopy, according to the Oxford English dictionary, describes a layer or material above our heads, normally suggested as a form of shelter or cover. This actually stems from the Latin word conopeum which means ‘mosquito net over a bed.’ Who says this blog isn’t educational? Any which way you look at it, staring at the word canopy, the image of a Swedish melodic death metal band doesn’t immediately come to mind. But upon listening to the bludgeoning force split between three guitarists, who breathed new life into a dying breed of metal, that vision attaches substantial weight to that single word and a monster of skull-crushing compositions is at your disposal. In tune with the original Gothenburg melo-death trinity of In Flames, At The Gates and Dark Tranquillity, the sextet of Canopy bring the multiple guitar harmonies and unmistakable death growls, but with the aid of heavyweight, denser guitars tones that technology couldn’t produce twenty years ago and the creative influences of some of the more experimental names in the metal game a la Opeth and Strapping Young Lad. Their acclaim for easing emotion and atmosphere out of a darker, heavier style of music speaks for itself. Where 2010’s Menhir succeeds is taking that creativity and ramming it into a combustible yet massively textured furnace, burning with the intensity of a forest fire. Speaking of fire, third track in Earth Splits Into Fire prophecies the self-destruction of our planet and our species through a booming death sentence, led in by acoustic plucking with the inevitable pulverisation of three guitars worth of distortion and downtuning and hammerblows of double kick pedals drawing ever closer, before they collide in a detonation of riffs, shredding and blast beats. Canopy blend the old breed with new techniques in such a way it comes across a fresh approach to metal entirely. Between the six combined muscle powers of these gentlemen, there lays a myriad of incredible musical and technical masterworks that have sunk so far under the radar, it seems ironic that they should bear the name Canopy.

Menhir, their most known album can be purchased either via Bandcamp, or via Dissension.se, where as their previous two albums, Will And Perception and Serene Catharsis can only be bought through Dissension.se.

Post rock, or post metal in whichever way you want to view this band’s music seems provoke three kinds of moods for me personally. A soundscape that aims to transcend space, a soundscape that plays with our emotions or a soundscape that represents some kind of darkness or doomsday scenario. A Swarm Of The Sun definitely falls into the latter category of these moods. The musical workload masterminded by two Swedish gentlemen, drags rock music kicking and screaming into a chasm, with a black sky onset. Characteristically of this genre, it’s appropriately grandiose, Refuge fitting its title of warning signs to come from the apocalypse. It sounds monumental, like the shifting between Earth’s tectonics. Little time is given to adjust to the scale of the guitar barrage that begins, and fills 2010 album Zenith’s running time, all the while with dulcet tones trying hush the oncoming threat. There are quieter moments, filled with the echoes of strings plucked, resonating beautifully, yet it still maintains that air of foreboding, skilfully executed by these two undeniably talented musicians. Darkness rarely sounds this alluring and judging by the quality of their two albums in an eight-year lifespan, it rarely receives this much adoration too.

2010’s Zenith, as well as this year’s The Rifts and 2007’s King Of Everything EP are all available from A Swarm Of The Sun’s Bandcamp page, all for a small fee.